I’ve been part of my local EV owners group for getting on for a year now. Who do I see there? Well, mostly older people with disposable income. Buying 2 ton cars from Tesla and others. They have petrol cars as well, big detached houses, go on far flung holidays etc. It’s not enough to have an EV and solar on the roof, and a Zappi charger. There are some Leafs, some Zoes, Niros and Konas etc, and then there’s me with my “cheap” Smart ForTwo EQ. A bargain at £17,000 for my fellow poor millennials. If you don’t live at home, you probably can’t afford it.

What people in the group tend to talk about most include the new electric cars coming out, cost savings over fuel, 0-60 times, and charging infrastructure. Things that I care deeply about, some of which are the main reasons I bought an EV: climate, pollution, congestion, cycling, micro mobility and more, basically never come up. Unless I bring them up. Even autonomy and RoboTaxis have never been mentioned to me at least, once again, unless I bring them up.

I’ve watched Bjørn Nyland on YouTube since 2013 when he got his Model S. I think I was a little late but I went back and watched the videos I’d missed, and haven’t missed one since. I commented on a recent video of his road trip, and in particular one where he was in Bern. He met multiple followers who had flown around the world, and I made a comment questioning this American guy’s sustainability credentials.

The response I received from Bjørn took me by surprise to say the least. It was scathing. He brought up meat, enjoying life(?) and flying, which is the one thing I actually brought up in my comment. Because obviously flying has a gargantuan impact on your footprint. I’ve watched many videos of Bjørn flying around the world and eating meat, often in the same video, and said nothing. He has brought up the issue of Tesla drivers littering superchargers, and the problem of food waste, so he’s doing a lot of good. And you can’t argue with what he’s done in selling hundreds of people on EVs they might not have bought otherwise. I just hope he keeps progressing and carries on taking the next steps, because that will send a huge message to his 150,000 subscribers. 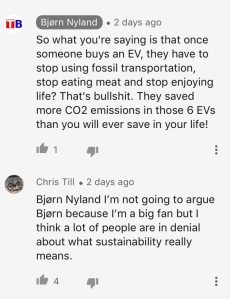 As EVs have progressed and gained somewhat mainstream traction, it seems as if they’ve lost their way in terms of the message they’re sending. While I understand why Tesla have focused on straight line performance as a way to attract petrol heads and other non-environmentalists, with the other automakers it’s a different story. They refuse to compare EVs to fossil counterparts, refuse to talk about their pollution reducing aspects in many cases.

Luckily, Tesla are about much more than just acceleration times. RoboTaxis, Trucks, Solar, Storage, eBikes? (fingers crossed). But regardless of whether or not Tesla do an eBike, I feel like it’s becoming ever clearer that micromobility is where the real action and change is right now and going forward. So many form factors, so much innovation, and it’s so simple. We just need to open our minds up to a new way of getting around. And also open up to the idea of better quality vehicles, not just £300 scooters that can be dangerous on our bumpy roads (once they’re actually legal). Once we do that, the opportunities are almost limitless. I just wish people would talk to me about these things for once, not just the other way around.

To go back to the title of this post, I don’t think most EV drivers are deniers. But the majority are most certainly not environmentalists. I think the true environmentalists are about to shun car ownership entirely, shun big detached houses and flying. Among other things.

Considering most people’s commutes and daily errands are easily eBike compatible distances, even in big countries like the US. It’s quite obvious that we’re utterly failing in tackling our desperate climate and air pollution crises.

Not only would it be far cheaper to incentivise cycling and eBikes, electric kick scooters etc, but we would get rid of traffic, be healthier and happier. We’d take an immense amount of strain off of health services (who as we’ve heard, are overstretched and struggling).

It’s so bloody obvious, and yet we’re having to campaign for segregated bike routes. Why should we campaign for common sense? Why the fuck should anyone do that?

It’s becoming clear to me that electric vehicles of the non-autonomous variety are not going to solve much. We can’t get them into widespread use quickly enough when we consider how quickly the climate crisis is accelerating.

We can’t wait until 2025 for the other manufacturers to make EVs in significant volumes. Tesla are different because every car they’re building can instantly transition into being a RoboTaxi. No other car can, so they are effectively useless. And that’s new EVs. Let alone new fossil cars (including hybrids).

We also have a ridiculous situation with the sizes of cars ever increasing, the roads staying them same, while still encouraging people to cycle. Anyone think that makes sense? I talked to people at work about commuting by bike. They thought I was mad. When I asked if they would do it if there were traffic free routes, they said they would. It doesn’t get more clear than that.

The British Cycling survey that I participated in and that was just released showed that even ‘hardcore’ road cyclists don’t feel safe on the roads. How can you expect people to take up cycling for the first time in that kind of environment? I took several years off from cycling when I was younger. When I returned to cycling, I remember I was scared and had to slowly build my confidence back, starting on quiet roads. And I was an experienced rider with years of road riding in my past. So I can’t even imagine how it would feel to a complete novice.

So what do we do? For a start, instantly transition into spending all money that would be allocated to new roads into new or upgraded micro mobility infrastructure. Instead of simply patching up potholes so they can quickly wear out again, use the opportunity to redesign the entire road layout and incorporate cycling into areas previously thought too narrow. Make more one way systems in towns and cities. If the cars are autonomous, they’re not going to get confused and annoyed like us stupid humans anyway (if you’re anything like me). And if you’ve got half the road dedicated to micro mobility, then chances are we’re going to choose bike or scooter anyway.

We also need to improve public transport with electric buses. We need good quality cycle hire schemes for when you’re not at home and don’t have your own bike with you. Then of course there’s trains, trams, subways, high speed trains built alongside motorways (so they don’t destroy the countryside further).

Something you see in Denmark and Japan especially are bicycle “multi storey car parks”. Secure, paid bike parks in all urban areas, business parks etc that treat bicycles as real vehicles. Not cheap, disposable, rusty pieces of junk. These are essential in my view. People will probably scoff, but like I said, why should you campaign for common sense? When things have been proven in other countries, you just go ahead and implement it yourself.

We also need to reduce our populations to sustainable levels with common sense proposals to do so. We need to build up rather than out in our cities. We can’t all live in big, detached houses filled with crap we don’t need. We need to embrace tunnels more than we do now. I don’t agree with everything The Boring Company is doing but generally they are on the right track. Hyperloop is the holy grail when it comes to allowing us a way to continue global tourism into the long term without destroying the planet. But we don’t know how far away that is, and I’m getting away from the suburban focus of this post.

There are so many aspects of sustainability that go far beyond just transport. Maybe I’ll get into them in another post. But for now, please let me know if you have any other ideas for local transport. I might have missed something obvious.